When the strong winds that circle the Arctic slacken, cold polar air can escape and cause extreme winter chills in parts of the Northern hemisphere. A new study finds that these weak states have become more persistent over the past four decades and can be linked to cold winters in Russia and Europe. It is the first to show that changes in winds high up in the stratosphere substantially contributed to the observed winter cooling trend in northern Eurasia. While it is still a subject of research how the Arctic under climate change impacts the rest of the world, this study lends further support that a changing Arctic impacts the weather across large swaths of the Northern Hemisphere population centers.

“In winter, the freezing Arctic air is normally ‘locked’ by strong circumpolar winds several tens of kilometers high in the atmosphere, known as the stratospheric polar vortex, so that the cold air is confined near the pole,” says Marlene Kretschmer from PIK, lead-author of the study to be published in the Bulletin of the American Meteorological Society. “We found that there’s a shift towards more-persistent weak states of the polar vortex. This allows frigid air to break out of the Arctic and threaten Russia and Europe with cold extremes. In fact this can explain most of the observed cooling of Eurasian winters since 1990.” 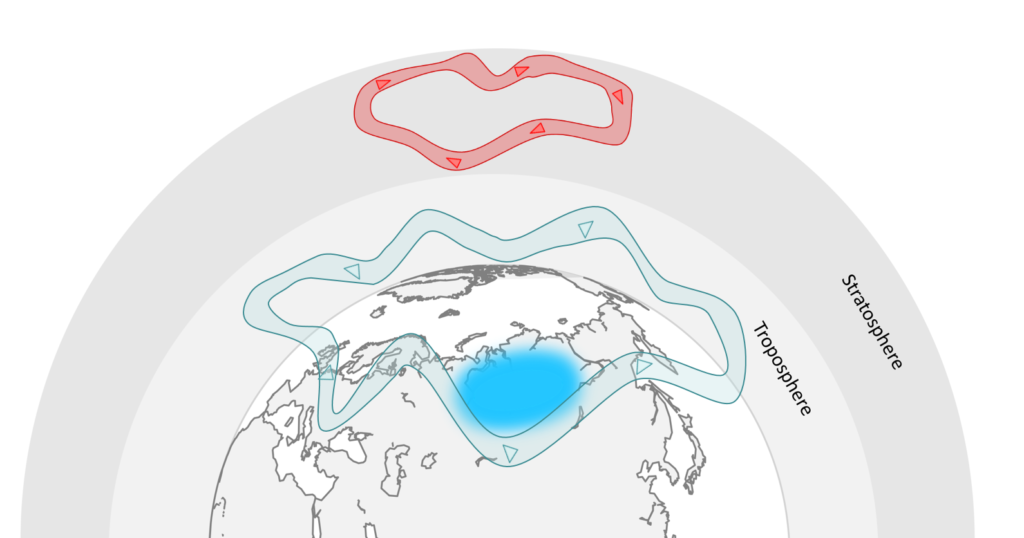 Despite global warming, recent winters in the Northeastern US, Europe and especially Asia were anomalously cold – some regions like Western Siberia even show a downward temperature trend in winter. In stark contrast, the Arctic has been warming rapidly. Paradoxically, both phenomena are likely linked: When sea-ice North of Scandinavia and Russia melts, the uncovered ocean releases more warmth into the atmosphere and this can impact the atmosphere up to about 30 kilometers height in the stratosphere disturbing the polar vortex. Weak states of the high-altitude wind circling the Arctic then favors the occurrence of cold spells in the mid-latitudes. Previous work by Kretschmer and colleagues identified this causal pathway in observational data and it is further supported by several climate computer simulation studies.
“Our latest findings not only confirm the link between a weak polar vortex and severe winter weather, but also calculated how much of the observed cooling in regions like Russia and Scandinavia is linked to the weakening vortex. It turns out to be most,” says co-author Judah Cohen from Atmospheric and Environmental Research/Massachusetts Institute of Technology (US). “Several types of weather extremes are on the rise with climate change, and our study adds evidence that this can also include cold spells, which is an unpleasant surprise for these regions.” The effect is stronger over Asia and Europe than over the US.

“It is very important to understand how global warming affects circulation patterns in the atmosphere,” says co-author Dim Coumou from VU Amsterdam, Netherlands. “Jet Stream changes can lead to more abrupt and surprising disturbances to which society has to adapt. The uncertainties are quite large, but global warming provides a clear risk given its potential to disturb circulation patterns driving our weather – including potentially disastrous extremes.”

This result is related to project


Get in touch with us